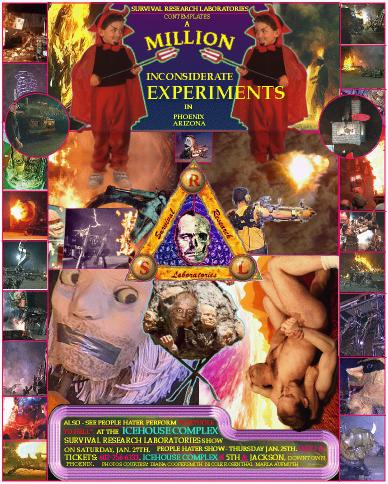 SRL and People Hater have secured a facility on the outskirts of Phoenix, Arizona for two large scale shows. This show is the second in a continuing series of "Inconsiderate Experiments" to be performed on the public during the coming months. This show will be the most elaborate and technically involved since the large scale Doom Show back in 1994. Ticket sales can be secured ahead of time by contacting the Icehouse complex via 602.392.7429. Below are some images of Mark Pauline testing the V1 before the Phoenix show:

Lecture by Mark Pauline, founder and directory of SRL at Neeb Hall on the Arizona State University Campus

World Premier of the SRL BBC Show Film on at the Icehouse Complex.

People Hater perform "Porthole to Hell" at the Icehouse. Peoplehater is a large scale industrial robotics performance group composed of several SRL members and directed by SRL member Chip Flynn. This is not to be missed.

Due to difficulties beyond the control of SRL, there will be no Internet feed of this event. We are hoping to broadcast video of the event later for remote viewers. Expect something unusual for remote internet viewers/participants at the next SRL performance.

Tickets are $15 in advance. A 2 night ticket (People Hater and SRL) is available, as well as an all festival ticket. We will hold tickets for people coming from out of town.


Approaching from the West, heading East on I-10, take the 7th Avenue exit and turn right (south). Head south about 3/4's of a mile, then turn left onto Jefferson, which is one way heading east. Head east two blocks, then turn right, proceed two blocks to Jackson Street. On the south side of the street, the Icehouse will be on your left and the Santa Fe Freight house (performance site) will be on your right.

If you miss the 7th avenue exit, or you are approaching from the East, proceed thru the tunnel, exiting on 7th street. Turn right (left if you are coming from the east) and head 3/4's of a mile South to Washington, which is one way heading West. Turn right, proceed to 5th Avenue, turn left and proceed south three blocks to Jackson Street.